I’ll be the first to admit that I was never crazy for ham.  During the holidays, I’d traditionally inhale turkey over ham. However, nearly two decades ago, my friend Janice showed up at a holiday party with a standout Honey Baked Ham that got everyone’s attention. It was and continues to be the ONLY homemade honey baked ham recipe I’ve ever liked.

These days, I’ll happily serve up a sweet ‘n savory ham for gatherings.  Perfect for Easter, coming right up. Especially when paired with Cheesy Scalloped Potatoes or Garlic-Butter Roasted Potatoes! ✨

This Honey Baked Ham Recipe never fails to impress, and requests for the recipe always come calling. This is the easy honey ham recipe you’ll return to over an over again…

Non-ham eaters may think twice, with this one on the table.

I’m convinced one reason for ham’s popularity is that it’s super easy to prepare and can feed a crowd.

This Honey Baked Ham tastes like you’ve spent much more time on it than you really did.

Can I use an unsliced ham instead of a spiral-sliced ham?

For ease of slicing and basting, we recommend using a spiral-sliced ham. However, you thinly slice your own ham prior to cooking.

How long do you bake ham for?

What should you serve ham with?

A few favorite side dishes to serve with ham include Garlic Herb Roasted Potatoes and Best Broccoli Apple Salad.

What can I do with leftover ham?

We love using leftover diced ham in Chinese Fried Rice or making use of the ham bone and ham meat in this Ham Potato Vegetable Soup. 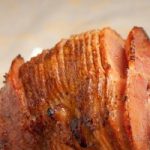 4.96 from 74 ratings
Print Pin SaveSaved
This is a homestyle Honey Baked Ham, rich with savory sweetness of ham mixed with honey. The sauce is more of an au jus, rather than a gravy. See notes if you want a thick sauce. Spoon plenty of it over the slices of ham, and watch it disappear! Great for holidays.
Prep Time: 10 mins
Cook Time: 1 hr
Servings: 20

If you enjoyed this recipe, please come back and give it a rating ♡
Click here to add your own private notes.

Sides to Pair with Your Ham…