Ever get a hankering for donuts, but prefer to stay clear of the deep fried food group? You can absolutely have your donut fix without all that oil. In fact, these Cinnamon Apple Baked Donuts need no oil at all.

What you’ll get is tender soft, melt-in-your-mouth mini donuts that are reminiscent of cake donuts, loaded with the goodness of apples and cinnamon. There’s nothing artificial about these little homemade fall treats.

These silicone mini donut pans are my key tool for baking mini baked donuts that turn out perfectly every time. They’re highly heat resistant, naturally non-stick, and super easy to clean. Two pans will make 24 mini donuts at a time. Otherwise, you can also use whatever donut pan you already have – I offered notes in the recipe below for those of you with regular sized donut pans.

These cinnamon apple baked donuts are best eaten fresh, if you want the slightly warm and fresh baked texture underneath that crisp cinnamon-sugar coating. If your family is anything like mine, it won’t be a problem — three batches of these mini donuts lasted 1.5 days in our house. Same with our caramel apple baked donuts.

That being said, seriously nobody will be mad about it if you whip out some leftover donuts the next morning.

Whether you’re baking with kids, or you just like having your ingredients streamlined ahead of time, here are our pro tips for easy prepping: 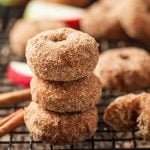 4.94 from 29 ratings
Print Pin SaveSaved
These Cinnamon Apple Baked Donuts not only look cute for fall, but they're bursting with all the season's goodness. Apple Baked Donuts are full of cinnamon apple flavor and a tenderness that melts in your mouth.
Prep Time: 15 mins
Cook Time: 7 mins
Total Time: 22 mins
Servings: 35

I love using Honeycrisp Apples for recipes, as it imparts a big and bright apple flavor without turning to mush. If you can use Honeycrisps, I highly recommend it. Otherwise, Granny Smith works well too. Do not dip donuts in butter/roll in cinnamon sugar until ready to serve, as the fresh coating helps provide a slightly crisp outer texture when eaten right away (though leftovers are still yummy.) Batter is deliberately not too sweet, since cinnamon sugar coating provides a lot of the sweetness. If you want a sweeter batter, add a bit more sugar into dry ingredients. If using regular-sized donut pans, bake time will still be roughly the same (7-8 min) as you will only fill each mold partway up, rather than all the way to the top.
Click here to add your own private notes.

This Cinnamon Sugar Candied Nuts Mix is always (always) gone by the end of the night. Make it for your next gathering, or fill mason jars for gifts.

You can buy cinnamon-sugar tortilla chips, OR you can easily whip up your own jaw-dropping version right at home. (Hint: they’re undeniably better when homemade.)

Nothing beats warm, pillowy soft cinnamon rolls fresh out of the oven. These homemade cinnamon rolls will ruin all other store-bought versions for you, guaranteed.