These are THE cinnamon rolls with cream cheese frosting to make when you’re craving the real deal, straight out of your own oven.

In between classic cinnamon roll bakings, feel free to try our Cinnamon Roll Coffee Cake in a jiffy for a moist coffee cake with cinnamon-roll flavors.

Your family will adore these fluffy, soft, and just-sweet-enough cinnamon rolls straight out of the oven.  They may not bother to wait for you to top these with cream cheese frosting, and honestly?

This cream cheese frosting is similar to one we use for everything from Moist Carrot Cupcakes to Gingerbread Loaf Cake…which means it’s ridiculously awesome. That said, you can choose to go without, because these freshly baked rolls are just that good.

Ingredients for Your Best Cinnamon Rolls

For fluffy soft, melt-in-your-mouth cinnamon rolls, gather these 9 ingredients. You probably have half of these items in your pantry or fridge already:

As for the luscious cream cheese filling, you’ll need the following 5 ingredients:

You’ll notice that we don’t simply pour all the flour in when mixing the dough; you’ll add it in increments, which is very important to the dough texture. You’ll ultimately aim for dough that’s soft and pliable and smooth; not overly sticky nor dry/crumbly. Adding a bit of flour at a time is key.

This cream cheese frosting is unbelievably scrumptious.  It’s definitely not the thin, runny coating some of us are used to. This one is a rich, decadent frosting, thanks in part to the addition of corn syrup. Again, if you prefer to go without, you can omit the corn syrup as long as you don’t mind a slightly thinner texture.

The frosting marries perfectly with the warm rolls.  I habitually lessen the amount of sugar in almost everything I make, so I personally use less sugar than what the recipe calls for.  If you opt to use a bit less sugar as well, know that the frosting will still be delicious.

Prepare These Cinnamon Rolls Ahead of Time

My favorite thing about these cinnamon rolls is that they can be prepared the night before and taken out to bake the morning of!  You just need to take it out to rise about 30 minutes in the morning, and it’s ready to be baked.

Note also that the cream cheese frosting can be made entirely ahead of time and chilled until ready to use.

If you’re not into the idea of waking up at 4am to make fresh cinnamon rolls, you’ll love the fact that the unbaked rolls can be prepared the night before.

It goes without saying that once you bake your cinnamon rolls, they must be eaten immediately, while still warm. We doubt that’ll be an issue at all.

Watch This Recipe in action: 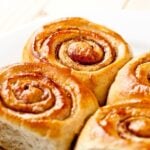 For the cinnamon filling:

Prep time includes passive dough-rise time, for 2 risings. You can sub half of the all-purpose flour with whole wheat flour, if you like.  If you enjoyed this recipe, please come back and give it a rating ♡
Click here to add your own private notes.