The sun has finally decided to shine upon Minnesota. I don’t care if it’s hot and humid. It’s become my weather motto: I complain during the arctic winters, so I don’t get to also complain about the heat. I can only pick one season to wah-wah over. Even when it’s so hot that typing makes me sweat, I’m good with it.

Since we only get like 2 months of warmth around here, we all take our grilling season verrry seriously. There’s no taking the grill for granted. I’ve never seen such Weber respect until we moved here. Which brings me straight to our tender carne asada recipe.

Often, homemade carne asada results in steak that tends to be chewy and rather tough, despite slicing against the grain. Most of the time, people are confused and wonder why their skirt or flank steaks remain chewy. I’ve personally shied away from using skirt or flank steaks in the past for the same reason.

However. One day I decided to use a secret ingredient that I routinely use for tenderizing my Korean kalbi beef. Like, duh. I’ve already been doing that for decades and why didn’t I think of it for my carne asada recipe earlier…

What cut of beef is used for carne asada?

It’s common to use skirt steak or flank steak for most carne asada recipes. You can use more expensive cuts of steak such as ribeye for tenderness, but there is no need to do so unless you need to use up your freezer meat.

As mentioned, skirt and flank steaks can often turn out more tough/chewy than ideal, even when you “do everything right” and even when you slice against the grain. That’s where the marinade makes a world of difference.

You can make the most tender, flavorful carne asada using the more affordable/traditional skirt or flank steaks with the right technique.

I’m guessing it’s not on many people’s radar. If it is, you might be a kindred spirit who makes kalbi beef the same way I do.

It’s kiwi. This powerful little guy is more than just a cute name. Mashed up green kiwi added during the last 30 minutes of marinading = magic. Don’t let it sit any longer than that, or the beef can over-tenderize to the point of turning mushy. Which would not be delicious.

By the way, you can’t taste the kiwi at all. Its main purpose is to boost the tenderness during the final 30 minutes of marinading. You’ll end up with some kind of wonderful.

Any other tips for the best carne asada?

What to Serve with Carne Asada:

Watch this recipe in action: 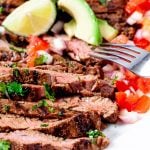 4.50 from 12 ratings
Print Pin SaveSaved
Your carne asada can be ultra tender, with a secret ingredient that works for almost any cut of beef you want to grill. We're sharing our tips on how to make supremely flavorful, tender, juicy carne asada right at home.
Prep Time: 15 mins
Cook Time: 7 mins
Servings: 6

*You may want to add a pinch or two of table salt to the marinade if using Tamari soy sauce, as it tends to be less salty than regular soy sauce. *Carne asada is delicious with tortillas, rice, or try our favorite lime rice.
Click here to add your own private notes.