Chinese New Year is this week. Not that I would have known it, except for my trusty Google calendar hitting me over the head that it was this week.

Hubby’s worse off than me. He had no clue it was Chinese New Year until he walked by a community celebration on his way to coach basketball, of all things.

We didn’t even know there was a local Chinese club, and even if we did, we wouldn’t join it because we can’t speak the lingo. Duh.

Well, I know a few more words than Hubby does.

We are so not traditional. We are totally watered down. We blame it on our parents 🙂

Japchae isn’t technically Chinese. But I’ve been to plenty of family parties and potlucks that have been graced by the mouthwatering presence of these stir fry glass noodles.

After moving to the midwest, I forgot about the awesomeness of Jap Chae. But my temporary memory lapse wouldn’t last long.

A few years in, a Korean friend made a mountainous tray of scrumptious Jap Chae for a party. It was the dish that kept going empty, and somehow she had some secret stash and kept refilling.

I had thirds. Or fifths. Nobody was counting.

The point is I got immediately re-hooked to the chewy deliciousness of Jap Chae and made it my kitchen mission.

First, let’s chat mushrooms. Note that these must be the dried Shitake mushrooms found in most Asian aisles of major grocery stores. They’re different from anything labeled “shitake” in the refrigerated sections; get the dry kind only. They’re aromatic and intensely flavorful.

This is when I shed silent tears for my non-mushroom eating friends.

A bit ‘o beef talk. You can use either a moderate portion of beef filet or ribeye for the protein. It’ll turn out ridiculously tender and savory.

This colorful dish is teeming with veggies: carrots, spinach, and white mushrooms contribute to an unforgettable party in your mouth.

A party you’ll wish could go on and on and on.

By the way, feel free make it meatless if you prefer. Just omit the protein for an incredible vegetarian dish.

The potato starch glass noodles are springy, light, and toothsome. They have a nice chewy yet soft texture.

Not heavy, allowing us to devour more of it without the guilt.

There’s no soup, but these noodles are 120% slurp worthy.

watch this recipe in action: 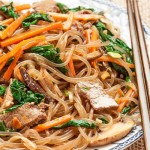 Be the first to rate!
Print Pin SaveSaved
Jap Chae is a savory, full-flavored stir fry consisting of potato starch glass noodles. It's naturally healthy and gluten free. A combination of veggies and tender beef makes this a standout dish. Bring it to your next party and watch it vanish.
Prep Time: 30 mins
Cook Time: 20 mins
Servings: 6

Here are some tried and truly delicious recipes for your Asian food mood: